You are here: Home>History>Ebrington>Ebrington Women's Institute 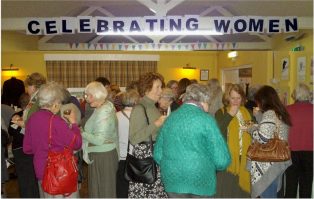 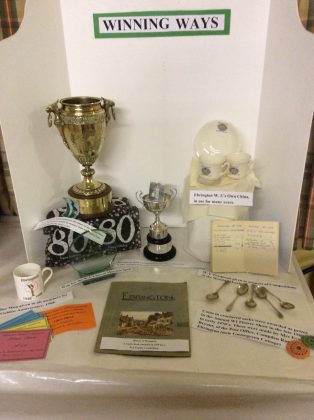 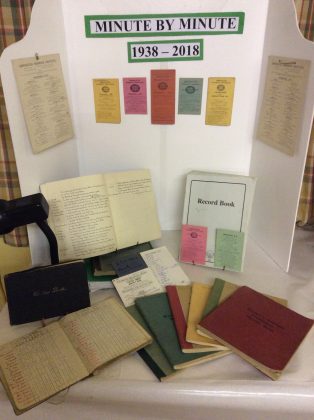 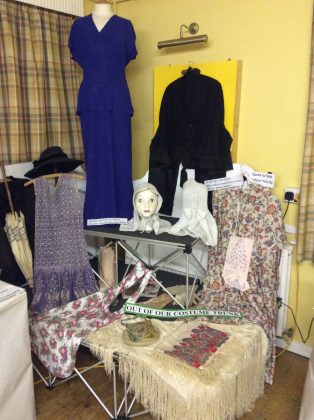 80 years ago, on the 3rd of February 1938, at a well-attended meeting in the Assembly Room above Mr Page’s butchers shop at the Ebrington Arms, Ebrington W.I. was formed.  45 members joined immediately.

Mrs Dorothy Davis Rimmer, an American lady living at Ebrington Manor, was elected the first president.  Mrs Evelyn Hawkins, the village schoolmistress, became the secretary, a job she did admirably for 28 years.  The first meetings were taken up with adopting rules, electing a committee and discussing ideas for a future programme of events.

Ebrington W.I. and the War Effort

Plunged almost immediately into war and the threat of invasion, this influenced their monthly agenda with the talks and demonstrations taking place before the business, usually to allow speakers time to get home before the blackout.  Talks were heavily dominated by the need to save and be thrifty and in general ‘Make do and Mend’.  Tea was followed by social times which included charades, sketches and games etc.  From the beginning members were aware of the needs of the community.  They were always at the forefront when funds had to be raised or assistance given.  During the war W.I. representatives were appointed to the various committees concerned with local war work.  In 1939 an emergency canteen was provided for the soldiers of the Green Howards based at the Manor.  First Aid was learnt, clothes for the homeless in Birmingham sorted and delivered, a Sugar Club was formed to allow jams and preserves to be made.  A committee meeting during 1940 even had to be abandoned due to some members being called away for A.R.P. duties because of an air raid.  Monetary contributions were sent the National War Savings; St. Dunstan’s, British Empire Cancer Campaign, Red Cross etc. all benefitted from flag days, waste paper collections and donations.  Money was also given to install and maintain a telephone in the District Nurse’s home in Campden.  Members provided Christmas parcels for serving men from our parish, knitted helmets for the Home Guard and comforts for the troops.  In more peaceful times successful campaigns provided two extra post boxes in the village and a telephone box for Hidcote Boyce together with a Midland Red Bus service (where is it now?)

For over 20 years our members corresponded with the members of Waerenga-a-Hika W.I., near Gisbourne, in New Zealand.  This link was established by Gladys Cox who had married a New Zealander and emigrated after the First World War.  During the Second World War they sent an interesting variety of gifts, such as fruit cakes, Shreddo, tins of lard and bars of soap.  Our most treasured memento, still in use today, is the model of a wooden Maori Meeting house received from them in 1954.

To begin with, meetings were held in the Assembly Room at the Ebrington Arms, or occasionally at the school, then in 1958, after almost 20 years of fund raising, the Village Hall was opened in time for our 20th birthday party.  This hall had been financed by villagers, ably assisted by the W.I.  who had organised dances, whist drives and raffles etc.

Music, drama, art and handicrafts have always been of interest and the choir, still going strong, sing each year at the County Christmas Concerts in Cheltenham Town Hall, around the village Carol Singing and on special occasions in the Church.  We take part in County and National competitions, being proud that our entry in 1971 with “This Green and Pleasant Land” was on show in London at the Ideal Homes Exhibition.  In 1975 our rag rug presentation for “Tomorrow’s Heirlooms” at the Commonwealth Institute was much admired and was then put on display at Foyle’s Bookshop.

Sports and recreational activities have always been undertaken with great gusto and much laughter, whether indoors or out.  Tennis, Badminton, Skittles and Orienteering have occupied the members as have Clay Pigeon Shooting, Gliding, Golf, Dry-Slope Skiing and sailing with Scrabble and Quizzing for the not-so-fit.  The intrepid band of monthly walkers have been together for over thirty years and in 2005 reached the mile-stone of 1000 miles walked without using the same paths more than once.  They are still going strong although now they occasionally repeat some of their memorable earlier rambles.  The weather is no deterrent and this year the picnic all-day walk in May was the wettest they had ever undertaken although seemingly enjoyed by all.  There is a skilled and very productive sewing group which over the years has made several quilts, new kneelers for the Church together with pew cushions and also a magnificent wall hanging depicting scenes of Ebrington village life.

At the forefront of village life

Being a member of Ebrington W.I. instantly means you are part of a world-wide organisation, looking to improve the lot of everyone, but women in particular.  The W.I. has also always been at the forefront of village life striving to help with local issues wherever necessary.  For the past 80 years this has been a source of pride and will continue to be so.

On the 8th February, to celebrate the 80th anniversary of the foundation members held a “Soirée” with wine and canapés and an exhibition of the history of Ebrington W.I.  compiled from our extensive archives, which includes all the minute books from 1938 to the present.  Scrapbooks, local history surveys of the parish, publications, costumes and much, much more were admired.  The theme of the evening, “Celebrating Women”, was created with songs, poems and a powerpoint presentation which was greatly enjoyed by members and invited guests.  Birthday cake and the ubiquitous cup of tea toasted the health and future of Ebrington W.I.  before a rousing rendition of the W.I.  anthem, “Jerusalem”, brought the happy evening to a close.