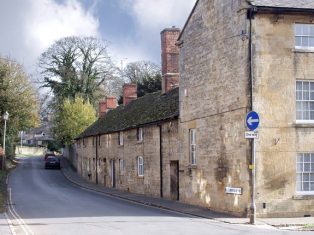 Cidermill Lane with corner house and row of cottages 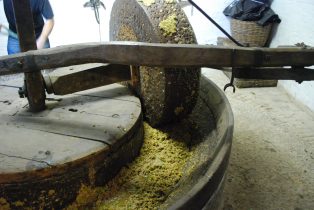 Milling apples in a cider mill 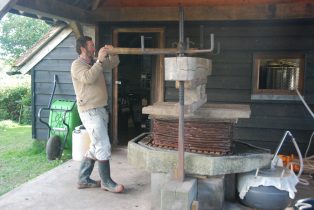 Second pressing of apples to extract the juice 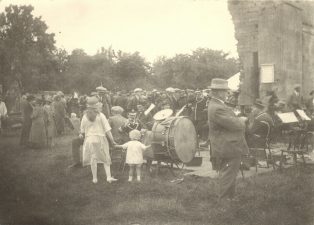 Fete in the orchard around old Campden House 1920s 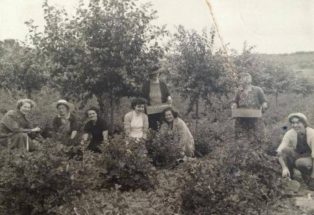 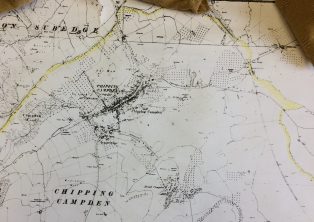 It’s Blossom Time – though sadly we will not be exploring the Blossom Trail around Evesham this year. There is no Blossom Trail in Campden either – but that’s because nearly all our orchards have disappeared under the pressure of housing development.

From the CCHS Archives we have been able to find out more about Campden’s orchards in past years – using maps, transcribed wills, advertisements for house sales in the 1700s and 1800s, photographs and people’s memories.

Fred Coldicott (born 1910), in his book ‘Memories of an Old Campdonian’, says:

One of the loveliest features of the countryside is now practically extinct: that is the cherry orchards. When I was a lad, there were five large orchards and two smaller ones in Campden and Broad Campden. At Broad Campden they were at Briar Hill Farm and W.N. Izod’s, at the rear of his farmhouse. At Campden there was Hand’s Orchard, opposite side of the road to the Coneygree; George Haines in Westington, and Attlepin Farm; then there was the smaller one in Gainsborough’s, behind the old ruins, and Uncle Bob’s at Catbrook.

(See more memories in the article below)

In the early years the fruit was most likely to be apples and pears, grown in the orchards of the well-to-do families who did not need all the land around their house for growing vegetables or grazing animals. The earliest map in the Archives, 1722, shows orchards in the grounds of old Campden House and it may be that at this time the ‘cyder-house’ was built, with its mill, in what is now Cidermill Lane. These were rented from the Gainsborough estate, but other orchards were attached to houses, particularly occupying the burgage plots going back to Back Ends from the High Street.  (See the story of Cidermill Lane below)

Gradually, in the 1800s, the orchards were extended, particularly around the farms in Westington and along what is now called Catbrook, and also Station Road. They were becoming more commercial and this may have been when cherry trees were introduced.

Allotments were very popular in Campden, reaching a peak of 360 in 1887, but after WWI there was a falling off in demand and some, such as Hand’s Orchard in Station Road, were converted into orchards. The time between the wars was probably the most productive, but in the late 40’s demand for housing took over – the only blossom we see now, apart from Wolds End Orchard, is on the ornamental cherry trees lining Sheep Street.
(see the full story below)

See also the article on Basket-making in Campden