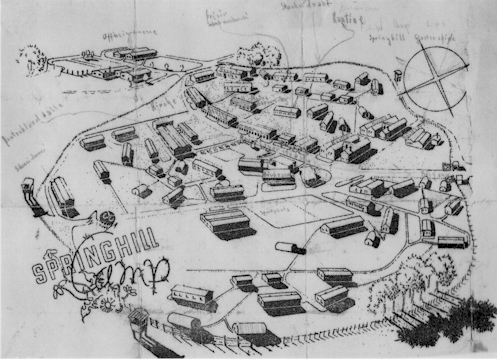 Klaus Behr was a German prisoner of war at Springhill Camp, near Campden, from capture on 4th September 1944 until repatriation on 7th February 1948.  His diary was translated and transcribed in 2010/2011 by a team of volunteers.

In 2010 we received a disc containing 250 pages of typewritten German transcript, an extract of a  diary written between 1938 and 1956 by Klaus Behr.  The section we have is from his time as a Prisoner of War in Camp 185 Springhill, near Campden.  His family found the diary in the attic after Behr’s death in 1994.

For more information see the article by Carol Jackson in Notes & Queries Vol VII, No. 5, Autumn 2013.

… today a heavy storm is keeping us in our rooms.  It actually mirrors well the state of mind which one feels.  The spirit, which wants so much to be heartily pleased about the spring and newly awakened life, feels the weight of time, the separation from home, and its unending suffering like a storm which booms through one’s heart.  …  Today the only thing for me to do is to go on an Easter walk, the Faustian one.

It’s the same today as well.  … if I think about our life here with cakes and wonderful noontimes and compare this with the suffering homeland.  I believe that these Easter days are the last which the poor people at home will have to go through under conditions of war.  It really seems as if we are on track for the end of the war now and, unless we are very much mistaken, that Berlin will be taken within two weeks, hopefully from the west.

Today one is astonished …that one could have imagined a victory for us, conquering America, Russia and England.  And one feels an unspeakable rage towards those that didn’t spare us from this fate for the sake of their prestige; those who through criminal blindness and unscrupulousness, and without any sense of responsibility, led a whole population into the abyss.  Were it not just too grave, one would have to laugh at the claim that they had learnt from history and would not fall for making the same mistakes again.  Can we top this for stupidity?

The fact of this lost war … brings my attention to the personality of those who bear the responsibility.  This element of being an upstart seems to be particularly important when one considers the typical weaknesses of an upstart.  And if I rejected the type of dictatorial government in my way of thinking up to this point, which is only slowly taking shape as far as these political matters are concerned, since this type of government, even although it did not start in this way, had to apparently become rule by violence – just because the possibility of intervening was absent – it really seems to make people blinkered: those who can only see the goal in their field of vision and who cut reality out and for which reason the statement, nay the slogan: we will conquer because we must conquer, seems to me to be typical. …

Enrolment is the main event in the camp today.  Yesterday, however, we were served a German sound film, a quite nice entertainment film without any political flavour:  ‘Das Andere Ich’ [My Other Self] with Matthias Wiemann, and that did surprise me.  I watched it… in Berlin before the war, the second time in Russia, and the third time here in England!  I think it’s really nice of the English to show us this film … here as prisoners of war, as entertainment.  One can’t really ask for much more.  For two hours I was out of the barbed wire and a little closer to the far removed mindset of the FFA [Frau/wife, Firma/Family business, Auto/Car] and very grateful to the English for that.

Here one basks in the sun, enjoying Spring and afternoons in the grass, while it is reported today that at home the Russians and Americans are marching into Berlin.  This is well within the realms of possibility after Berlin was already under Russian artillery fire yesterday and there were six English bombing raids during the night.

The feeling surges terribly in a storm through my heart.  What will have become of loved ones and everything that one held near and dear?  The Russians in Berlin and Vienna.  What monstrosity is hidden behind these words?  And with elemental force, resentment rears up … against those who brought Germany so far that it lies impotent on the ground and has to endure everything.  A couple of conscienceless and irresponsible people, who believed they had leadership qualities and in the intoxication of initial success lost the ground from under their feet and plunged a whole population into the endless suffering and misery of this war, whose end, plainly visible from the outset, could only bring defeat.  A huge gamble was placed on millions and millions of human lives and now, after persevering sacrificially for six increasingly hard years of war, the German population is confronted with the loss of war and the futility of its stalwart endurance.

…probably the idea of a German Reich has also been buried forever.  The last attempt was begun by a regime of violence, incapable and with no skills in diplomacy or foreign affairs.  Their only strength was propaganda, which managed to force onto a whole population belief and hope, even conviction in their virtuousness.   Under this regime no lies or means were too cruel if used for its goals, for the sake of cheap success.  This regime now look on, after the die was cast long ago, as a whole population is massacred in the pointless resistance, even forcing this suicide with arms!!

The Russians are fighting in Berlin in Schönhauser Allee, Prenzlauer Allee and Brunnenstraße.  What horror!  One almost can’t imagine it at all:  the Russians just off the Alexanderplatz [Alexander Square].  Places which mean home, through which you’ve travelled in the heaviest of city traffic by car, bus, tram, underground and suburban railway, now occupied by the Russians.  The metro now only for the transportation of the wounded, Linden, Leipziger Straße, Brandenburg Gate, under Russian artillery fire.

That’s the point we’ve reached now – one just can’t grasp it.  Just why did we sacrifice such a considerable part of our life? … …  Now I’m sitting behind barbed wire in a prisoner of war camp in England and am at leisure to work on Greek and Latin.  At home the bombs of English and American planes, which remorselessly laid waste our beautiful homeland and made life there hell, have been replaced by Russian artillery shells and missiles, which are now finishing the demolition of a city of 4 ½ million people.  The feeling of wretchedness can no longer be expressed in words.

The Russians have half taken Berlin, the city centre and the west are not yet occupied.  In the pain which these thoughts keep arousing in me, again and again there erupts in me the strong sensation of obligation which the future places upon me if circumstances ever allow me to continue to run the works which have been in my family for over a hundred years.  … …  My heart tightens within me when I think of how Pe [Papa] is watching his work of half a century being destroyed.  What must life be like for our dear ones at home in these days, surely the worst of their 60 years in the hail of shells from which we were unable to protect them?

Russian tanks in the Grunewald area, Dahlem taken, I can scarcely express my feelings.  With powerful artillery and backed up by armoured flame-throwers I can see them advancing through my home area, know my relatives are in the cellar and jump in alarm at every shot, even eventually hits on the house, how will they get to defend our street?  Dreadful, these thoughts – they torture you especially in these days and hours.

Yes, yesterday there was an announcement on the radio that Hohenzollerndamm railway station and Halensee station have been occupied, so it seems that our dear ones at home are spared from the fighting.  I wonder how they are!