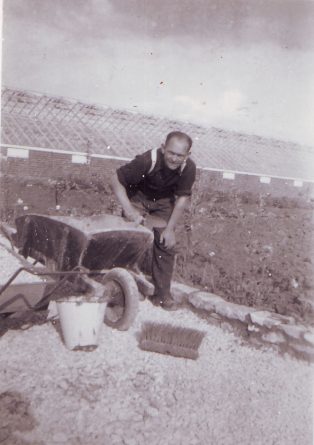 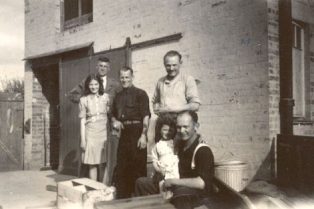 Lionel Ellis and Joan Horne, neighbour, with the three POWs and Judith 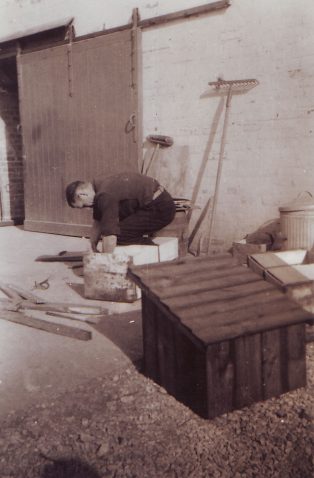 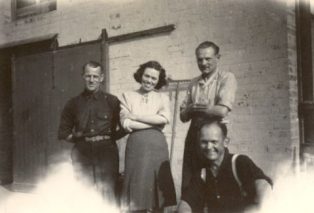 I married Lionel Ellis in 1939 and we purchased some land on the Aston Road and set up a nursery.  During the War we employed four German prisoners from the local camp. They were wonderful workers and I have very much regretted that we lost touch.  I had no one to contact in Germany and did not know if there was a P.O.W. Association.

It is probable that they are no longer with us as they were older than me  but relatives may recognise them and be interested and, who knows, someone reading this may be able to identify one or the other.

Getting POWs as workers

I have a feeling that there were two camps on the ‘top’ road, as we call it, on the way to Moreton-in-the Marsh and Stow-on-the-Wold but Springhill was the main one.   Employers would apply to the War Agg. (War Agricultural Dept.) for P.O.W. workers and they would be transported to the various farms, etc. by lorry – there did not ever appear to be any problem of ‘safety’ but guess they were all “trusties”.

Hans came from one of the Baltic states, Latvia or somewhere.  Rudolf, I seem to think came from near the Russian border, or he had bad experience with Russians as his main expression was “Russky caput”!!  Herbert was the eldest and the fatherly one and I think came from Hamburg but my memory may be wrong there –  Charlie did not seem to mix so much with the other three – possibly he was from the other camp, but we did discover, after trying to teach him gardening and greenhouse work, that he had been a top gardener on one of the Rothschild estates!!!

Making toys and other items

We always had great difficulty getting them to take any of our food, but they would accept a drink.  My daughter Judith was aged three at the time and was a great favourite with them, and still has the faint memory of their kindness, especially Herbert who gave her a ‘ship in a bottle’, which she still treasures.  As well as the ship in the bottle one of them made her a ‘wibbly-wobbly’ dog, as she called it. It was a little dachshound (a dog unknown to us then) made of three wooden pieces – head, body and tailend – connected by wide elastic, and on wheels. When she pulled it along it wobbled!

Most of the prisoners were very industrious, especially if it meant earning a little spending money and most of the local Campden people benefited by the things they made which included very well-made ‘openout’ sewing boxes, wooden bowls, and warm slippers made from plaited, stripped rope.   One real treasure that they left us was a set of Nativity figures for our Church, parts of which we still have but unfortunately, being made of unfired clay, have deteriorated a little,  although some of the animals were used recently in a scene at a  Church festival.  As far as I can remember, the person in charge of this project was one of the Commandants, whose name I only remember as “Peter” – he was friendly with neighbour of ours who was church organist.

During the war my husband kept bees – mainly to apply for the extra sugar ration – we had a honey extractor, and as Charlie was in charge of some hives up at the camp, his commandant asked if they could borrow our extractor but Charlie made up the story that we would not let it off our premises – that the camp honeycombs would have to be brought down to us to be dealt with. Charlie figured out that by doing it that way he could “lift” a couple or so jars for us and his own gang without the commandant knowing – and it worked!!!

I always wanted to follow up on our acquaintance with them as we were very fond of them all. It was a pleasure to have them working for us and it would be great if some contact could be made again however distant.