You are here: Home>History>Campden in Wartime>German Prisoners of War in WWII>A Wartime Campden Christmas for a German PoW

A Wartime Campden Christmas for a German PoW 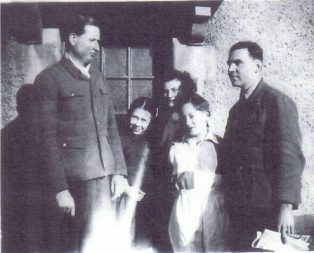 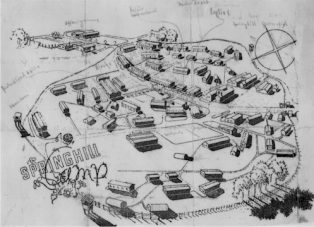 A plan of Springhill Camp

Klaus Behr was a German prisoner of war at Springhill Camp, near Campden, from capture on 4th September 1944 until repatriation on 7th February 1948.  His diary was translated and transcribed in 2010/2011 by a team of volunteers.

A fairy tale has become true!  It happened to me, yesterday, when my Sunday came to an end with a truly unique experience.  The time in which one had to learn how little a man was worth has been overturned in favour of the opposite view.  Our camp orchestra played music from Handel as the penultimate item in the setting of an evening service in a full church in Chipping Campden, and Karl May sang arias from the Messiah.  Naturally, we all went with them.  It was such a beautiful experience to see members of both communities worshipping God in unity and then to experience this prayerful music illuminated only by the light of a few candles around the music stands of the performers as they filled the whole vast expanse with its vaulted ceiling and the sound flowed through and swelled to a glorious crescendo.  It was uniquely beautiful and unsurpassably atmospheric.

I sat in a pew with a friend, next to an Englishman, who, however, left the church soon after the beginning of the concert.  It is thanks to this really trivial occurrence that I owe my fairy tale experience.  Soon an Englishwoman came from the church doorway and took the place which had been vacated. I asked her whether she needed more space for people accompanying her, and she answered in the positive with reference to the two women who were standing in the church doorway, so we gave up our seats to them.  I then saw that there was again quite a crowd of English people standing around the church doorway, among them a number of older women and ladies, who were standing listening to the music.  This rather went against the grain with me, so I asked some friends who were seated in the back row whether they would give up their seats for the women, at which point the whole row emptied and the women took the proffered seats with grateful thanks.

There was an older man standing next to me who was embarrassed by the fact that they had been so unpunctual, and he apologised that they had disturbed us!  In no way did I regret having to stand, because I now had a wonderful view of the orchestra, illuminated by candlelight.  I was greatly astonished when the Englishman beside me asked whether Karl May was the singer that he knew from the earlier concerts organised by the English authorities in our camp.  We exchanged a few remarks about Handel and the Messiah, and suddenly I found myself achieving a long cherished ambition, which I had nourished for a very long time, ever since I found myself in England.  I was to be invited at the end of the concert to the home of this older man for a cup of coffee;  he would be alone with his wife and they lived here in a little house.  With great regret, I had to inform him that unfortunately we had to return to be locked in, and that we would definitely be counted at the camp gate.  However, he solved this very quickly; he knew one of the current English officers of our camp, ran after him and actually managed to obtain the permission for me that he sought – that I could accept the invitation and return to camp by 10.00pm.

I tumbled down into another world!

I asked permission to be absent from the officer in charge of our party who promised me that he would inform the guard post.  And now something began for me, which was rather like a chapter from “A Thousand and One Nights”; I tumbled down into another world!  I went together with the elderly man to the High Street in Chipping Campden, where on ground level he opened a door, and for the first time I was allowed to enter an English home.  One actually entered directly into the dwelling, without a step either up or down.  He put his coat on a table and asked me whether I also wanted to take mine off.  As I entered into the next room, I really felt as if I had been completely transported into the setting of “A Thousand and One Nights”.  It was as if I were as bewitched as a fairy tale prince and I felt as if I were still dreaming!  Being so accustomed to a colourless PoW and military world, I felt really oppressed by the weight of trepidation upon me when I suddenly found myself in the midst of such civilian cosiness and comfort, until I then inwardly felt continuous rejoicing because of the beautiful impression it made on me; around an open fire, from which some red-glowing coals threw out a welcome heat, stood sturdy upholstered furniture, into whose softness I immediately sank, not without feeling that all this surely could not be for me; it was so completely and utterly impossible that all this could be mine!  Thick carpets flowed from under this tremendous cosiness, with the light from a low table lamp above and pastel curtains at the windows to the side.  These were the same curtains through which I so often saw subdued lighting glowing when we drove past in the lorry both morning and evening, either going to work or returning, and I always cherished the wish that I would be allowed, even for a moment, to penetrate the homeliness which lay behind them.

A lively and interesting conversation – with coffee and cake!

Then I passed the next two hours in a kind of enchanted haze.  The lady of the house, who was most tastefully dressed and of striking appearance, competed with her husband in maintaining a really lively and interesting conversation, which anyway showed no sign of coming to a halt; that evening, I hardly noticed that I was speaking English and not German.  A cup of hot ground coffee with cream, to which I was invited to add sugar, together with Christmas cake, helped to cement with hospitality this friendship – between the victor and his prisoner of war – the importance of which is immense; one must accustom oneself to such impressions, otherwise one will not be able to absorb such enthusiastic gestures of this kind.  I was still eating my piece of cake from the beautiful porcelain plate and drinking the coffee which tasted so good from the matching cup, when the man of the house was at pains to offer me a cigarette, and hardly had I smoked the first than a second was produced and then a whole packet found its way into my pocket.  Then I had to choose between cider and a dark beer, which I found very difficult, so the man of the house had to make the choice for me, and said that “stout” went down better.  And all this was surrounded by and woven through with a lively and friendly conversation, in which later on a relation of the household joined in with just as much interest.

But then the clock hands reminded me of the time with inconsiderate severity and with that I parted company with my enchanted world of incomparable English hospitality.  The elderly man took me by car to the gate of the camp, where I once again expressed my thanks and asked to be remembered to the lady of the house, after which he extended me an invitation to spend Sunday with them, which he expressed with cordiality and all necessary formality; I unfortunately lacked the self-confidence to answer him in the same vein at all.  It was a huge shock to me to be dragged back into my accustomed world.  As my freedom ebbed away, I went through the wooden gate into the guardroom, where the rather surprised guards immediately went through my pockets, but it was only a superficial search; yet the impression was sufficient!  Then, of course, they did not fail to suspect me of going AWOL, especially as I was not in possession of an exit pass.  Then the rather hostile voices calmed down when I wrote my name on a piece of paper and they referred to an English major; even my “goodnight” was answered at the barbed wire gate and still overflowing with elation from my wonderful experiences, I walked through the sleeping camp to my barrack, where after reporting in, I found it impossible to go to sleep for a long time, despite lying horizontal, wrapped up in my three blankets and allowing the candles on the Christmas tree to cast their light long into the night before I extinguished them.