Project visits to other houses 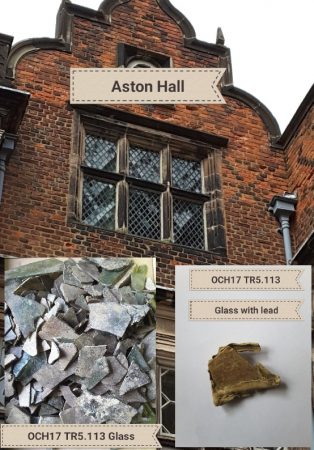 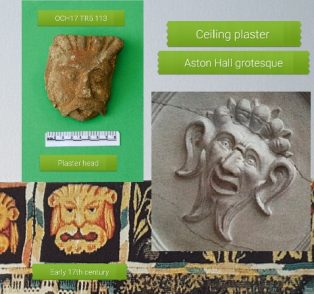 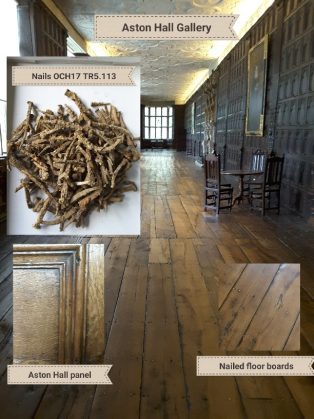 Long Gallery at Aston Hall, with nails from Campden House 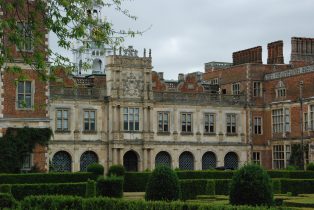 Our outing to Aston Hall in April 2017 was planned as part of the Campden House project, because of possible similarities in date and design: it was built in 1618, maybe just after Campden House, by John Thorpe for Sir Thomas Holte (coat of arms includes a squirrel: a group of squirrels is called a holt).  We learnt from the excellent guide about the significance of the red hand in the Holte coat of arms, James 1st gave a baronetcy to the first 200 people who paid £1035 to him to help him with the cost of armies in Ulster.  The Ulster coat of arms contains a red hand.  It was a hereditary title, they would carry a red hand in their coat of arms, but it would not allow access to the House of Lords or be a Peerage.  Baptist Hicks could not have been one of these: his baronetcy came later and he does not have a red hand in his coat of arms.

In 1643, during the Civil War, Aston Hall was captured by Roundheads, and the hole made by a cannon ball hole can still be seen in the staircase.  We were told an interesting story about a portrait in the Long Gallery of the lady who tied her husband naked to the bedpost and whipped him for changing sides in the Civil War.  The painting’s frame was bedposts with rope and whips as decoration.  There were many useful pointers to the design of Old Campden House, and with the photographs we were able to make links to our finds from the previous month’s dig.

The afternoon visit was equally fascinating, albeit unrelated to our project.  Soho House was the home  of Matthew Boulton, Birmingham industrialist and entrepreneur, from 1766-1809 and the meeting place during this period of the members of the Lunar Society.   Founded in 1750, this was a pioneering group of manufacturers, doctors and philosophers, including founder member Matthew Boulton, James Watt, his business partner, dissenter Joseph Priestley, potter Josiah Wedgwood, Erasmus Darwin, James Kier, Richard Lovell Edgeworth, John Whitehurst, William Small, William Withering, Thomas Day and Samuel Galton. They met on the first Sunday afternoon of the full moon, so they could travel home by moonlight after a good meal and discussion about their ideas and inventions.

The house was mainly the work of James and Samuel Wyatt.  Clad in slate, not stone,  with the latest interior fittings including Soho Manufactory brass handles, brightly painted canvas flooring, sash windows made with eldorado metal alloy, a rare 24 hour star clock, an early copying machine, steam-heated large bath and warm air central heating with boiler in the large cellars.

The  visit to Hatfield House in July 2017 was also linked to the project, through Robert Cecil (1563-1612), 1st Earl of Salisbury  who was a family friend of the Hicks’s.  Queen Elizabeth I lived in the old Palace, formerly occupied by the Bishops of Ely, until she was 25 years old: it was under the oak tree in the park that she received news of her accession in 1558.  The Palace continued to be a favoured royal palace until James I came to the throne in 1603.  At this time Robert Cecil, his first minister, owned a mansion called Theobalds, some miles away.  James I visited Theobalds, decided that he preferred it and so proposed an exchange which Cecil could hardly refuse.  Cecil decided to build a new mansion at Hatfield which was completed in 1611, using bricks from the partly demolished Palace.

There were many features of the house that were familiar to us from the visit to Aston Hall: a Great Hall entered by the main door, with gallery at one end; a Great Chamber and rooms set aside for the royal family and very important visitors; beautifully carved wood panelling and plasterwork and ornate mantelpieces – and a Long Gallery, for entertainment and exercise in poor weather.  An arched loggia had been enclosed in Victorian times, but gave us a good idea of the design for Campden House.  The house is of course much larger than Baptist Hicks would have built, but there are clues to follow with the design.  Our surviving Banqueting Houses are much larger and more decorative than the ones at Hatfield House, so we felt that we scored there!