You are here: Home>History>Films, Radio and Television>"The Centuries Between": Gas to the Cotswolds

"The Centuries Between": Gas to the Cotswolds

Campden people to act in film

“Praised by artists, antiquarians, architects, and lovers of Cotswold beauty in general, Chipping Campden has for the past few days been receiving tribute from that most modern of the arts, the cinema.”

Representatives of the Merlin Film Company have been in the town making a documentary film of behalf of the British Gas Council.

This week a “Journal” reporter met Mr Gilbert Gunn, who is directing the picture. Mr Gunn said that the story is based on the experience of the inhabitants of Broadway who were, for some years during the twenties, without gas following the closing down of the local company. In the film, of course, the actual village will be fictitious as will be the various characters who take part.

The film will show the trials of the villages living in homes without gas, then the approach to the nearest gas company requesting them to lay on the supply, and finally scenes showing the pipes, etc., being laid.

Of interest to Campden residents is the fact that the “Leading Lady” is played by Mrs Lilian Thomason who takes the part of a housewife. Mrs Thomason is the wife of Mr A F Thomason, chemist, of High Street, Chipping Campden, and is a well known member of the Campden Dramatic Society. She told the “Journal” that she was “worn out” with film making, and found a lot of it boring as it took such a long time to do just one little bit of the film.

Other local ladies in the film are Mrs Haydon, Mrs Warmington, Miss Keyte and Miss Coldicott.

Baker in own role

Mr Enoch Bennett, the well known baker in the town, is also taking part, and should not be camera-shy since he is cast as a baker!

Mr Gunn, who told the “Journal” that they have “shot” scenes of various places in Campden, but the greater part of the action is being taken at Mr W R Haines’s farm at Westington.

Miss Hathaway’s cottage at Broad Campden will also figure in the film.

Apart from illustrating the use of gas in the home, the film is also stressing its industrial and agricultural advantages, such as for use in milking machines, grain dryers, and incubators. For some of the scenes necessary in this part of the film, shots will be taken at Messrs. Fisher, Humphreys and Co. Ltd., Atlas Works, Pershore, and at Tewkesbury, and Mr F J Fielding’s farm at Apperley.

Mr Gunn thinks the film will run for about fifteen minutes when completed. He expects shooting to continue in Campden for about ten days, as the exterior shots are dependent upon the very un-dependable weather.

In addition to the local people taking part in the film, the rest of the players are members of the Cheltenham Civic Playhouse Company, including Mr Walter Hughes as a farmhand, Miss Norah Lowley as a district nurse, Gladys Hatton as a village woman, Mrs Tibet (Schoolmistress), Mr Harold Mann (Doctor), and Mr David Howell as a farmer. Mr Howell is well known in the Cotswolds as a solicitor appearing at the various police courts. 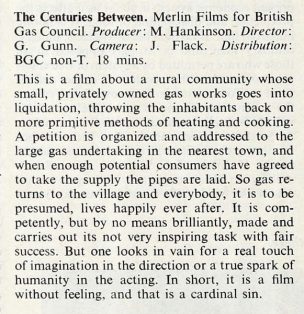 “Review of The Centuries Between”

A review of the film, titled “The Centuries Between”, made by Merlin Films for The British Gas Council appeared in Documentary Film News: Jan 1948-Jan 1949 and was rather uncomplimentary!