You are here: Home>History>Films, Radio and Television>“Have a Go” at Campden

“Have a Go” at Campden 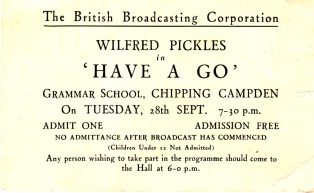 Humour and Wisdom from Cotswold Characters

“If there was any doubt that the first Cotswold ‘Have a Go’ recording at Chipping Campden Grammar School on Tuesday evening would be a roaring success it was finally dispelled when 74 year old Mrs Kate Drinkwater, who has eight married daughters and 21 grandchildren and has lived in Ebrington all her life, earnestly told Wilfred Pickles that if she were not herself she would like to be Mae West.

Mrs Drinkwater, a solemn bespectacled little woman who cultivates an allotment and wins prizes at the local flower show, was one of seven local men and women cleverly selected by Mr Pickles and his assistants from many volunteers to take part in the programme. As well as getting the biggest laugh of the evening she earned warm applause for her homely wisdom. Her ambition for the future was “peace in the world.”

The recording would have been at Ebrington if a suitable hall had been available there and because it was really Ebrington’s programme the village had a big share of tickets. Mr Pickles told his 250-strong audience that he and Mrs Pickles, who helps in the programme, decided to record “Have a Go” in the district when they visited Campden several months ago from Stratford-on-Avon where they had gone to see the plays. 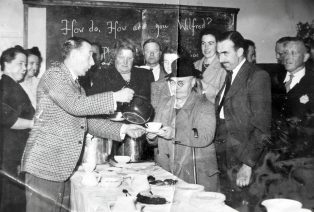 Wilfred Pickles playing host to ‘Have a Go’ audience members

It was unfortunate that Campden Town Hall was unsuitable for the recording; the contrast between Mr Pickles lively Yorkshire accent and the slower, softer tones of the people of the North Cotswolds would have been even more intriguing in the more traditional surroundings. As it was the modern school assembly hall saw the liveliest and noisiest Campden assembly since the pre-war parish meetings about the water supply.

Britain’s most popular radio programme is an expensive one. It is meticulously organised and within the limits of a single evening carefully prepared. A team of first-class performers gave a variety show lasting an hour to put the audience in the right frame of mind before Mr Pickles with a few preliminary words brought it to the necessary state of exuberance.

“Regard it as a family party,” said Mr Pickles. “Laugh as heartily as if you had paid to come in. Think of it just as a bit of a do in Chipping Campden. Unfasten your coats and loosen your corsets.”

There was a family atmosphere all right. By the time the “Have a Go” chorus (previously rehearsed) had been heartily rendered: Wilfred Pickles had been announced by the producer (Barney Colehan) and had been greeted with the usual lusty cheer and had delivered his customary greeting (“Ladies and gentlemen of Chipping Campden, ‘ow do”), the audience were ready to laugh and clap at anything. 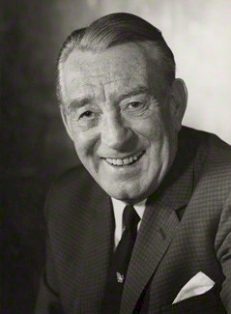 “I bet you thought I was tall, dark and handsome” he told them when he first appeared, and added, “I thought you were better looking too.

Mr Pickles uses a script for only the introductory part of the programme in which he describes the town or district in which the recording is made. On Tuesday he described Ebrington and Campden as two of the most beautiful villages in the Cotswolds and told his usual “local” story.

The oldest local inhabitant to take part was 78 year-old George Hawkins from Paxford (a farm worker all his life, who wore a red rose in his buttonhole.)

“If you could pick a place, where would you live?” he asked. “Ebrington”, replied George without hesitation. He said he had been married twice and by his second wife had two children aged eight and nine.  Running, he said, was his hobby and he still played cricket. Appropriately enough he disliked lazy people.

Another grand old Cotswold character to come before the microphone was seventy three years old James Williams, better known, he told Mr Pickles, as ‘teapot’. “My old uncle gave me that name,” he said. “When I was a little boy I used to help him pick the stones off the horse road. Other people called him teapot and he pegged out.”

Questioned about his travels, James admitted that he had been as far as Stratford, otherwise “I’ve never been a stone’s throw from this place.”  When asked what he would like to be he ruminated a bit and then replied, “What’s ‘is name, up in London – Churchill; you can have your cigars you know.” Smoking is his only vice.

“Suppose you won a lot of money in one of these football pools, how would you spend it?” asked Mr Pickles. “Very careful,” said James. He admitted that he did not like women after declaring that his favourite dislike was “a drunken ‘ooman.”

James also distinguished himself in the quiz, “Supply the last word; far and …..what?” said Mr Pickles. “Far and what,” said James complacently. His variation for “tooth and nail” was “tooth and three.”

Mrs Nellie Trimmer Daumby, of Springhill, who lives in a cottage “half a mile from nowhere else” and is the wife of a cowman, said she would like to be the Duchess of Gloucester; and Bill Paine (“I lives in Yubberton”) told a delightful of how he helped to shift a fowl pen by remaining inside and carrying  the perches whilst his friends did the work.

Joyce Baker, of Ebrington, provided scope for plenty of apt gags when she announced that she worked in a pickle factory. 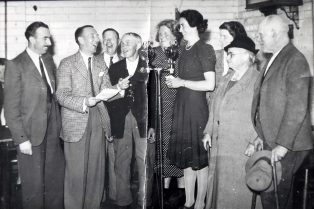 First of the locals to face the microphone was Eileen Keyte, of Campden, whose experience in amateur theatricals gave her confidence. She said that if she were stranded on a desert island she would like with her “Stewart Macpherson because he knows all the answers; Dick Barton because he would get us out of all the scrapes and Christopher Stone and all his records.”  She abhorred men who jingled their money in their pockets when they were talking.

Those who provided the variety entertainment were the Godfrey Brothers, Violet Carson the pianist for the recording and Frederick Noble (bass-baritone).

The “Have a Go” programme is resumed next week but the Campden recording will not go on air until April 27, 1949

Mr H J Luckett, Clerk to the Ebrington Parish Council, asks us to insert the following communication: “I wish to repudiate the various rumours around Ebrington connected with the Wilfred Pickles’ programme with regard to the allocation of tickets and position of posters. Mr T H Fisher and myself obliged the BBC by undertaking the arrangements so far as Ebrington parish was concerned and I am pleased to state that everyone in the parish who complied with the conditions for obtaining tickets received a free ticket of admission.”