You are here: Home>History>Films, Radio and Television>Filming "The Franchise Affair"

The Franchise Affair was a filmed adaptation of the novel by Josephine Tey in which Michael Denison played a country solicitor acting for two women, played by Dulcie Gray and Marjorie Fielding, who are accused of mistreating a local girl in an attempt to make her their servant.  It was directed by Lawrence Huntington.

“Anyone in Chipping Campden with a few minutes spare time on their hands could earn an honest 5 shillings this week by idling along the High Street or propping up a corner of a shop. These terms were offered by a film unit from Elstree Studios who were shooting sequences of the new British Film “The Franchise Affair” with well known stars, Dulcie Gray and Michael Denison.

The unit arrived on Monday and by Tuesday morning they were ready for action with their camera fitted to a trolley to run alongside the pavement. Michael Denison, dressed in grey and carrying a briefcase, strode briskly along, raising his hat and smiling broadly and collided with Miss Gray as she rushed from a shop. And then they did it again, and again, ….” 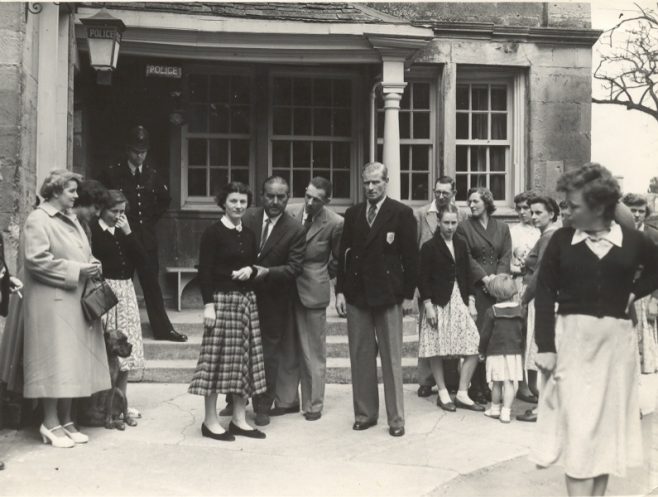 Betty Grove (of Calf Lane) provided the following information:  A publicity photograph (possibly from the Cotswold Journal, Central Newspapers Co. Ltd, ref. A5329) taken outside The Martins which was being used as a Police Station – see the police lamp and Police Station sign top left. The group and the policeman (probably an actor) on the left are unknown.  The central group, left to right, Ruby Shadbolt in a check skirt who was an extra, with three actors including Anthony Nicholls (who played Kevin McDermott) on the right in a blazer.  Ruby was married to Johnny Shadbolt, manager of Morrey’s Stores.

The right-hand group, from left to right: the man in glasses is Gordon Bennett, the young girl with central hair parting in front of him in floral dress is Jennifer Alleley of Aston Road, then about 12 years old.  The woman in double-breasted coat is Millie Coldicott (d. 1968), Fred Coldicott’s first wife and mother of Betty Grove.  The small girl in front of Millie is possibly the daughter of Gordon and Mary Bennett.  The young woman at the rear holding a doll is Jean Bennett, aged about 15 years, sister of Doreen Bennett.  Immediately in front of her is Mary Bennett, wife of Gordon and sister-in-law to Nancy Smith, nee Bennett. The girl in the foreground (slightly out of focus) is unknown.  The head to the right rear of her is Doreen Bennett, sister to Jean.

The shop next to the Library was then a hairdressers called Myosotis.  The film company erected a bay window in front of it with old-style nobbly glass, trees in pots outside and a tearoom sign.  It is rumoured that a coach-load of visitors arrived while this was in place for the filming and went into it looking for afternoon tea!  The scene in the square showed the actors walking from the tearoom across the Square to the Kings Arms and entering the central door nearest to Darby’s House. Many locals were in this Square scene and they had to boo and jeer. 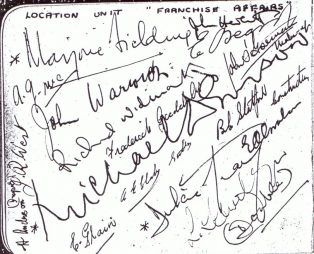 The scene on a bus was filmed on Broadway Hill – the old road, before the by-pass was made.  Dudley Howell’s mother was in the street shopping when she was stopped and asked if she would be an extra and go on the bus.  They went down the hill, stopped on a bend, turned round and drove back up and did a retake, then they were delivered back to Campden and asked if they would do a bit more on another day.  There were three days filming and at the end, the extras went to the Noel Arms where they were paid for 3 days work as extra – £5.