You are here: Home>History>Campden at Work>Taking the fleeces to market

Taking the fleeces to market 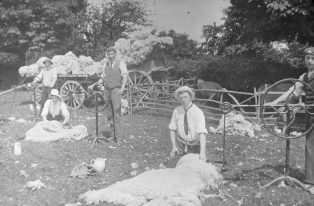 sheep shearing, fleeces on the wagon 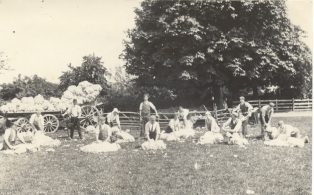 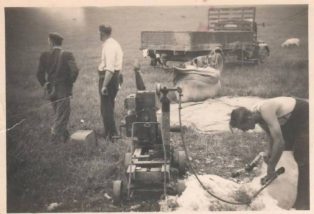 Harry Bennett’s recollections of the sales of fleeces

[After coming out of hospital in 1932] … I did an interesting 3 days work at the local wool auction, labelling bales of wool as they came in. The sale was held in the old tithe yard opposite the church. The tithe barn has now been demolished and a house built with the stone. The barn was in a very dilapidated state and almost roofless but it was all right for storing bales of wool in July. The actual auction was held in a marquee in the yard where the samples were on show, most of the buyers came from the Yorkshire woollen mills, after the sale we had to label all the bales with the buyer’s name and address and they 18 were despatched by rail. At that time we were renting the tithe yard and small buildings and stabling and a paddock for the horse and also storage for pig and poultry food.

The fleece sales (re)started in 1919, after WWI and in 1928 the Evesham Journal reported that there were 7000 fleeces sold. This number increased over the next ten years to 12,000 each year. No records of fleece sales after WWII have yet been found.

Another interesting account of the fleece market was published in the Daily News in 1929, written by Mabel New, wife of Oliver New, Campden solicitor.