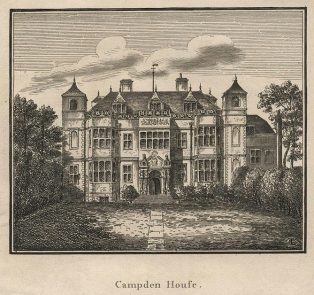 True Bill that, at Kensington co. Midd. in the night of the said day, Henry Elliott alias Moris late of the said parish, labourer, broke burglariously into the dwelling-house of Sir Baptiste Hickes knt. and bart., and stole therefrom and carried away…

satten –  satin; calymanco – calico?; Tellettos – unknown; gingerlyne – presumably a gingery colour; Tufttaffitye – taffeta?; unum instrumentum auratum  = “one gold tool/instrument”; vocatum – called – possibly a gold utensil such as a salt, a ewer or bowl, set with an agate and diamonds, maybe in the form of a falcon, engraved with a falcon or with a falcon finial.

Putting himself on trial, Henry Elliott was found ‘Not Guilty’; but was reprisoned in the House of Correction.

Covering with close parchment a parchment, 1 foot 9 inches long by 11.5 inches broad, this lengthy indictment is so defaced as to be legible only in places; but the several dozens of items of stolen goods seem to indicate that, if he did not actually carry on business at his Kensington house, Sir Baptiste Hickes knt. and bart. used some part of the dwelling-house for the storage of the goods, in which he, a member of the Merchant Taylors Company (sic), dealt.