You are here: Home>About CCHS>CCHS Members get together for coffee and cake

CCHS Members get together for coffee and cake 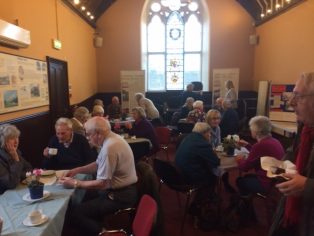 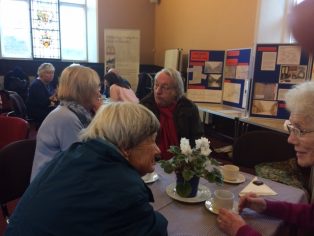 The display at the Members' Coffee Morning showed how the history of Park Road was being uncovered.

CCHS members were invited for coffee and cake on 23 November to thank them for their support to the Society during the year.

Around 60 people called in to the Court Room, and many stayed for entire morning, chatting about local history and offering suggestions about future activities.  The display about research into the history of Park Road prompted memories, with interest in the nails and pipestems that had been dug up in one garden – the use of a metal detector was offered!

Two people responded to the advert for help in transcribing more Campden wills – 500 have now been done – only 499 to go! But at least they are the later (easier) ones to do. It is a task that can be done by anyone with a computer and internet access at home, so we are hoping for a few more volunteers for our existing group. The list of transcribed wills has been put in the Members’ Section of the website and a will can be sent to enquirers on request.

The Park Road Story is nearly ready to be put on the website – then we shall doubtless get emails telling us what we have got wrong! But that is part of uncovering local history.